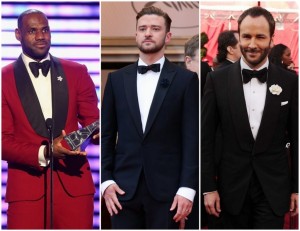 Flower lapel pins seem to be the latest fashion once again as sports starts, actors, and other famous male figures are rarely seen without one these days. NBA superstars and frequent GQ cover boys Lebron James and Dwyane Wade have frequently been spotted wearing a flower pin on their designer jacket lapels. Athletes, and the NBA in particular, seem to be embracing this trend- on a January TNT halftime show, all five men, including Charles Barkley, were wearing lapel flowers.The designer Tom Ford has also given a fashion nod to the trendy item, and even Justin Timberlake has been seen sporting a flower pin.

Replacing the previously popular pocket square, flower lapel pins are made of a variety of materials including silk, chiffon and felt to name just a few. Many men are wearing lapel flower pins in more edgy materials such as felt or burlap for a more cutting-edge look. Unlike the more traditional pocket square, this new incarnation of a classic fashion standard gives off a fun, playful air, along with a pop of color.

The boutonniere trend started with the War of the Roses, when the House of York and the House of Lancaster each adopted one color. Soldiers, who didn’t wear military uniforms, donned the appropriate color to signify which side they were fighting for.

Through history, men continued to wear a version of the boutonniere as folded lapels on men’s suits became the norm. It continued to be worn for formal wear, becoming less common after WWII. Popular entertainers such as Dean Martin and Frank Sinatra, however, continued to don the flower pin to denote classic and classy style. The boutonniere became a menswear staple for formal events such as weddings, funerals, proms, and homecomings.